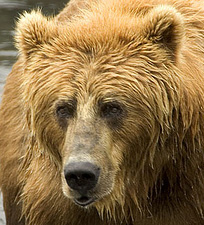 Ursus is Latin for “bear”; arctos comes from Greek arktos, meaning bear.  The double meaning here may suggest that brown bears are the archetypal bear.

There is only one brown bear species, but there are many subspecies. Depending on where they live brown bears are also known as the Alaskan, Grizzly, European, Syrian, and Kodiak brown bear.

The brown bear has the widest geographical distribution of all eight bear species in existence today. It once ranged across a large portion of North America, including northern Mexico, throughout Europe, Asia, the Middle East, and even across North Africa. Today, the largest populations of brown bears live in Russia, the United States (mostly in Alaska) and Canada. Many brown bear populations in Europe, Asia and North America are small and isolated.

Brown bears live in lots of different habitats, from desert edges to mountain forests and arctic conditions. All brown bears prefer to have a thick vegetative cover for shelter by day.

Why Brown Bears are Awesome:

Brown bears are the largest omnivore. They have a hump above their shoulders that is a mass of muscle that provides their front legs with exceptional power for digging. They also have long claws that can be the length of a human finger, which also aid in digging plant roots and excavating dens.

Watch this video for a better idea of just how strong brown bears are.  You will get a good look at the claws as well.

Why We Care about Brown Bears:

Brown bears are predators and seed dispersers, making them very important to the ecosystem. Brown bears also help the economies of places such as Yellowstone National Park, Wyoming and parts of Alaska because of their contribution to ecotourism.

This entry was posted on January 16, 2014 by Maymie Higgins in Bears, Mammals, Wildlife.