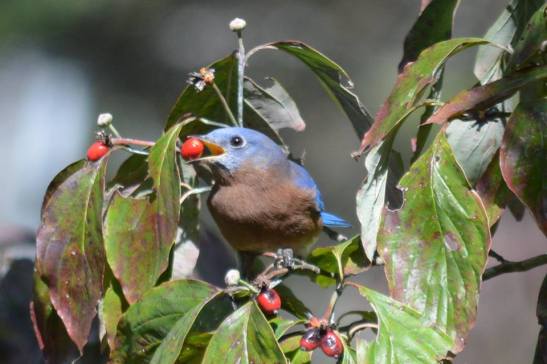 Male Eastern Bluebird having a berry from my dogwood tree. Photo by Maymie Higgins

Meadows, field edges, golf courses and other open areas surrounded by trees that offer suitable nest holes or perhaps even nest boxes made available by their human fans (including me).

How Long Eastern Bluebirds Live:  Up to 10 years

What I Love About Eastern Bluebirds:

I have owned and monitored bluebird boxes since 1994, having fallen deeply in love with this fierce little passerine since the first time I laid eyes on them.  Somehow, in spite of having been a novice birder for several years, it was not until I was twenty-eight years of age that I first saw an Eastern Bluebird.  I asked around about them and bought books (the internet had not quite invaded every corner of the Earth yet) and learned that they needed help with nesting sites in which to rear their young.   There were other species of birds, originally native to Europe that were aggressively competing with bluebirds for nesting sites and had caused their numbers to decline significantly.  But things have gotten much better, according to the North American Breeding Bird Survey.  Eastern Bluebird numbers have increased by almost two percent each year from 1966 to 2010.  All the efforts of bluebird champions have yielded a comeback!

I have collected several heart-warming, humorous, and sometimes sad stories from my observations and interactions as a bluebird nest box monitor.  The first year I had a bluebird box, I was renting a house that was newly built in the middle of what had been a corn field.  It was perfect bluebird habitat.  The local bluebirds, while grateful for the box and readily nested in it, were otherwise unaccustomed to humans nosing around their home.  Fortunately, I am not easily discouraged because my first year of nest monitoring included having a male swoop my head and peck it.  We peacefully coexisted soon thereafter and I am happy to report I have never had that experience again.  There were a total of four broods and eighteen eggs that year, with descending numbers of eggs per clutch-six, five, four and three.  One of the clutches was consumed by a black snake who had somehow managed to work out the nail that was keeping the door shut.  I immediately revised the set up.  I placed the wooden pole that was holding the box inside a just slightly larger PVC pipe that was the full length of the wooden pole and kept the PVC sprayed with nonstick cooking spray.  I also drove a wood screw into the door, instead of a nail, to insure that only wildlife carrying and able to operate a Philips head screwdriver could even consider raiding the nest.

One of many Eastern Bluebird broods photographed by Maymie Higgins over twenty years.

Two summers ago, a snake somehow managed to bypass my system again and managed to dine on day old fledglings and their mother.  I was heartbroken.  The door was not breached.  There were no animal tracks at the base.  My best guess is that a snake dangled precariously from a pine branch above the box during the night and startled the female while she was keeping the hatchlings warm.  I pruned those branches and cleaned the old, now flattened nest out of the box.  For weeks afterwards, I watched in sadness from my office window as the male tried to secure a new mate.  He would wing flap and vocalize all day long.  Only occasionally, a female bluebird would come by and check out the box.  It was the middle of the summer, so all the local females were already paired off and rearing their young. After about a month, he found a mate.  And there were eggs soon after.  After the eggs hatched, and I guess somewhat out of guilt, I placed a small plastic bowl of dried mealworms on the ground in front of the nest box.  The male vocalized from a branch above in what I can only assume was the bluebird equivalent of a cursing out.  No bluebird had ever quite spoken to me so harshly.  But there were no swoops or head pecks, thankfully.  I returned to my desk just in time to watch in disbelief as he launched a full attack at the bowl.  After the attack, he grasped the bowl with his talons and carried it several feet, several times, with dried mealworms spilling out with each journey.  When he was done, the empty bowl was at least fifty feet from the nest box.  The bowl was subjected to regular attacks until I had a moment to retrieve it.  It was disconcertingly violent and a clear act of anger.  Daddy did not want any strange items near his babies.  He had already lost one family.  He was not losing another.

If you would like to have a bluebird box, here are some good tips from Audubon.  Try to think like a predator and set up your house in a way that will prevent squirrels, raccoons, other birds and snakes from making a meal of your bluebirds.  Cedar nest boxes made specifically for bluebirds are easily purchased at hardware stores, some retail stores and bird specialty stores such as Wild Birds Unlimited.  I purchased my boxes at Lowe’s Hardware.  I recommend putting a box on each side of your house so you can have two families at once or perhaps another experience like I recently had.  Two summers ago, Carolina Chickadees nested in one of the boxes, and they did so again last summer.  This is exciting because chickadees only have one brood per year!

A fellow bluebird fan has created a video that shows courtship behavior very well.  It made me smile.  I hope it makes you smile too.

My Tweets
Join 84 other followers