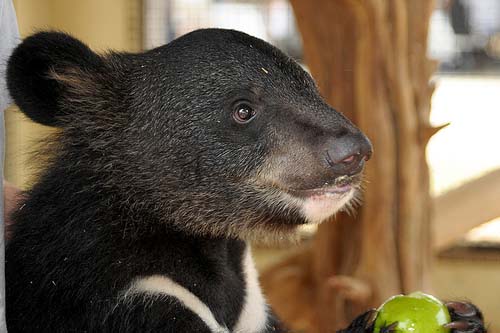 Asiatic black bear cub.
Photo from the Creative Commons. (although this is a bear cared for by Maymie Higgins in 2008.)

Ursus is from Latin ursinus “of or resembling a bear”. Thibetanus is Latin for “located in Tibet”.

Fossil remains of the Asiatic black bear have been found as far west as Germany and France. Now they only live in parts of Asia in a narrow band from southeastern Iran eastward through Afghanistan and Pakistan, across the foothills of the Himalayas, to Myanmar in small, isolated populations. Habitat is moist forests, on steep mountains, or areas where vegetation is thick. Many live in mountains in the winter and at lower altitudes during the summer. 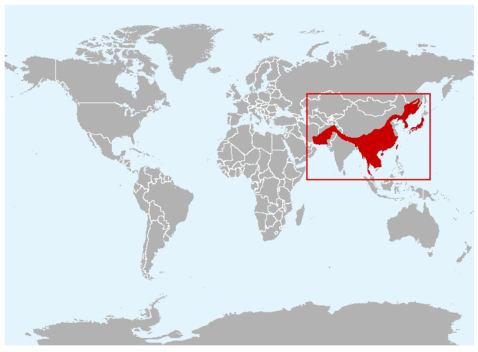 Fruit, roots, tubers and small animals. Asiatic black bears will also opportunistically eat other prey killed by tigers. This can end badly for the bears if caught by the tiger, which might turn the diner into dinner.

Why Asiatic Black Bears are Awesome:

Asiatic black bears are considered by some bear experts to be the most vocal of the eight bear species. They grunt, whine, roar, hiss, scream, cluck, make slurping sounds when they eat and can be very loud when surprised, hurt or angry. They also share some of their range with giant pandas, another bear species we should be intent on conserving forever.

Why We Care about Asiatic Black Bears:

Asiatic black bears are under tremendous threat with very little effort to conserve them. Even in protected areas, there is not enough variety of food resources to sustain them. In addition, this bear species is subjected to the cruel practice of bear bile collection that is practiced in Traditional Chinese Medicine. Sometimes the fact that all living beings deserve compassion and respect is sufficient reason to care, rather than only measuring the value of an animal species in terms of how humans benefit from its existence.

In Korea, biologists are working to restore wild Asiatic black bear populations through several activities including release of young bears into the wild annually and by working with local populations on methods of coexisting peacefully with bears. This video provides an overview of their progress.