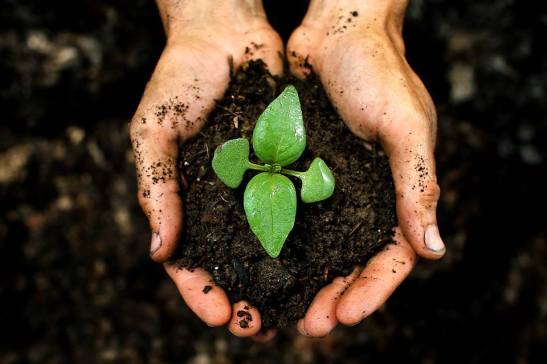 After the difficult winter of 2015, many of us have our hearts and minds transfixed on outdoor gardening activities. In my gardening research, I came across a huge success story in the world of sustainable living. I hope this information will inspire you, as it has me, to begin using a fertilizer brand for your lawn, vegetable and flower gardens that comes from the oldest recycler in the United States.

Over more than 85 years, the City of Milwaukee has undertaken one of the world’s oldest and largest recycling projects. In 1913, the City of Milwaukee created a sewerage commission to clean up the city’s waterways. By 1919, The Milwaukee Sewerage Commission’s laboratory formally adopted a new process for responsible recycling of biosludge. By 1921, all municipal sewers were connected to this system and processed in a central location at Jones Island, on the shore of Lake Michigan. In 1923 construction began on the first large-scale activated sludge plant in the world.  In 1925, the Sewerage Commission concluded that the disposal problem they faced could be solved by producing and marketing fertilizer. In 1974, the Jones Island Wastewater Treatment Plant was named a National Historic Engineering Site by the American Society of Civil Engineers.

Specifically, this new sewerage treatment process was the production of solids – the microbes left over from the treatment process and there was one problem. There were 50,000 – 70,000 tons of dried microbes left after the process and no one thought it responsible or even prudent to dispose this volume of waste and potential valuable resource in the landfill.  So the Sewerage Commission joined forces with the University of Wisconsin College Of Agriculture, where Professor Emil Truog and O.J. (Oyvind Juul) Noer began investigating uses of activated sludge as a fertilizer.

Noer experimented with field crops and vegetables and on golf courses, the use of this organic nitrogen fertilizer and found it superior and one-third the cost of other fertilizers commonly used at the time. Also, there was no danger of burning the turf even with over-application and it produced a dark green dense turf without causing excessive top growth. Noer knew he had a commercially viable product when word traveled throughout several golf clubs.

Following are examples of how Milorganite has adopted to market changes over the years. In 1926, most of the Milorganite was sold in bulk, but by the mid-1930s it was also packaged in 25, 50 and 100 lb. bags. In 1955, packaging changed to offer 40 and 80 lb. bags and again in the 1970s as 20 kg bags were introduced with the movement to metric in the U.S. Today, Milorganite is sold in a distinctive 36 lb. bag and a 5 lb. bag exclusively for the retail market, 50 lb. bags for the professional market, and reusable bulk bags for large area applications.  The blending market continues to be important as other companies find the nutrient analysis to be a valuable addition to their products.

Milorganite continues to help fund many important research projects at universities across the country including projects that study nutrient leaching and run-off, the effects of different fertility regimes and sources on irrigation requirements, and the effect of Milorganite phosphorus in the environment.

Milorganite summarizes its success as follows:

For more information and to determine where to purchase, you can visit Milorganite’s web site. You can watch this video to learn more about the product as well.

This entry was posted on May 5, 2015 by Maymie Higgins in The Ecotone Exchange, Wildlife.