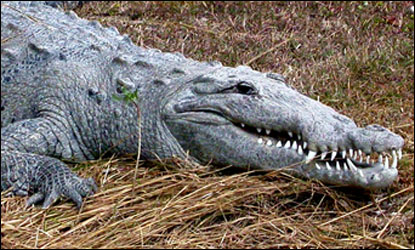 Preserving and restoring American crocodile habitat has been the most successful activity in helping to increase the Florida population, and in allowing the United States Fish and Wildlife Service to downgrade the Florida population status from endangered to threatened.  In addition, conservation measures were taken to reduce death rates such as creating road crossing culverts that allowed crocodiles to avoid being struck by cars.

This 2010 CNN video provides a good overview of biologists’ activities in conservation of the American crocodile.

Along the Atlantic and Pacific coasts, from Central America through South America and the Caribbean Islands in a variety of habitats including salt-water marshes, brackish environments and even fresh water rivers, lakes and reservoirs.

How We Can All Help American Crocodiles:

In the rare event that you see an American crocodile, leave it alone.  If you feel the crocodile is a threat to your family or pets, call wildlife officials.  And of course, keep everyone clear of the crocodile.

The Florida Fish and Wildlife Conservation Commission website provides A Guide to Living with Crocodiles that includes good advice on coexisting with crocodiles.  The brochure also explains the differences between alligators and crocodiles.

This entry was posted on February 24, 2014 by Maymie Higgins in Endangered Species, Reptiles, Wildlife.