In 2002, the United States Fish and Wildlife Service seized six polar bears in Puerto Rico that were owned by the Suarez Brothers Circus, a circus based in Mexico. The bears had spent eighteen months in the Caribbean while activists advocated for their release.  With a coordinated effort with People for the Ethical Treatment of Animals, Baerle, the only female, went to the Detroit Zoo. Wilhelm, Masha and Royal were destined for the North Carolina Zoo in Asheboro, North Carolina, and Boris and Kenneth went to the Point Defiance Zoo in Tacoma, Washington. Unfortunately, Royal died during the flight from San Juan on the way to the first stop in the U.S. in Memphis, Tennessee. Ten months later, U.S. officials seized the seventh and final female polar bear, named Alaska, saying the circus had false documents on her origin. Alaska was moved to the Baltimore Zoo.

Wilhelm, affectionately known as Willie, and his brother Masha received years of loving care in North Carolina. But the years of poor care and nutrition could not be erased. Masha was humanely euthanized in 2007 and a necropsy revealed the effects of years of malnutrition including gastric ulcers, bladder and kidney infections and pneumonia. Willie had many years of health problems as well but managed to overcome many of them. Willie died in October, 2013 in his new home at the Milwaukee Zoo, where he had lived since 2011 when he was moved so renovations to the polar bear exhibit could be made at the North Carolina Zoo.

This video shows the conditions these bears were kept in and some of the circus act.

Bears have long been used as performers in circuses, bear gardens, street acts, vaudeville, zoos, movies and television. The Romans considered bears a symbol of strength and power and used them in gladiator games. In bear baiting, bears would be staked in arenas with bets being made on how many attacking dogs would die before the bear succumbed. Or a bear would be chained to a bull and bets would be made on the bear or the bull’s demise.

The modern circus with bears began in England during the mid to late 1700s. The list of bear acts done in various venues reads like a children’s fictional story, or something from a cartoon to my thinking as one who finds natural bear behavior to be more than sufficiently entertaining. Bears have been trained in riding a bicycle, roller-skating, standing on and rolling a ball, riding horseback, walking bipedally on two tightropes, foot-juggling on a burning pole, and dancing with a woman, to list just a few of the known acts. 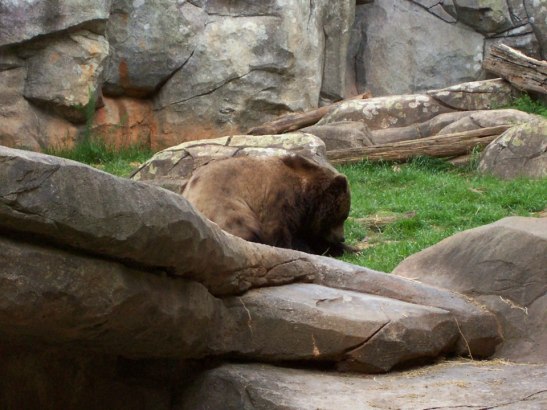 Bears were likely the first zoo animals. In 1500 BC, the queen of Egypt, Queen Hatshepsut, had a bear facility. King Ptolemy II of Egypt had a polar bear in a private zoo in Alexandria. The first U.S. zoo was established in Philadelphia during 1859, with a polar bear as the first North American “zoo bear.” Today, bears in zoos and wildlife parks are either offspring of captive bears or taken from the wild as an alternative to euthanasia. In these cases, zoos become sanctuary. For example, the two grizzly bears I helped care for while interning at the North Carolina Zoo were both nuisance bears in Yellowstone that had been relocated several times. Because they had become habituated to humans, they were unsafe. A zoo home was sought as opposed to destroying them. In addition, two of the American black bears at the North Carolina Zoo were rescued from a roadside zoo where they had been forced to perform for years.

While some may consider zoos as part of the entertainment industry, accredited zoos and aquariums do not train bears in behaviors for the purpose of entertainment of zoo visitors.  However, it is not uncommon for zookeepers to be asked “Does it do tricks?” or “Do you go in there with it?”.  My favorite response from a zookeeper I interned with was a simple, dry and mildly indignant “No!  It’s a bear!”

In a perfect world, bears would only exist in the wild, engaging in completely natural behaviors. In this perfect world, humans would only witness bears from afar, when visiting wild places and supporting ecotourism. When you consider the history of bears in entertainment, it is reasonable to be of good heart, for humans have made progress. But there is still work left to do. 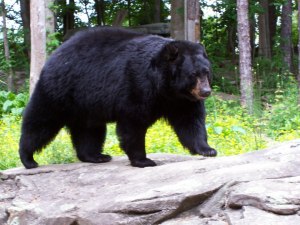 My Tweets
Join 84 other followers